Given this dynamic, complex environment, it is more important than ever for U.S. HEIs to deliver a degree of value. To gauge their perception of the ROI on their U.S. education, WES surveyed 1,655 international alumni who graduated between 2012 and 2019. The research was conducted from February to March of 2019 as part of a study that will be released this fall on the international student experience at U.S. HEIs. Although respondents affirmed the value of their degree, the survey exposed some gaps, indicating a need for improvements in areas of international student and alumni expectations, career support, and visa services.

The overwhelming majority of international alumni indicated that their U.S. degree was a good investment, partly because of high returns both socially and culturally. Alumni appear to be benefiting from the increased internationalization [6] on U.S. campuses. Most respondents indicated that their education expanded their global perspective and enhanced their ability to get along with people of different backgrounds, suggesting the development of intercultural as well as academic competencies. In addition to noting these social returns, respondents said their problem-solving skills improved as part of the well-rounded education they received in the U.S. (see Figure 1). 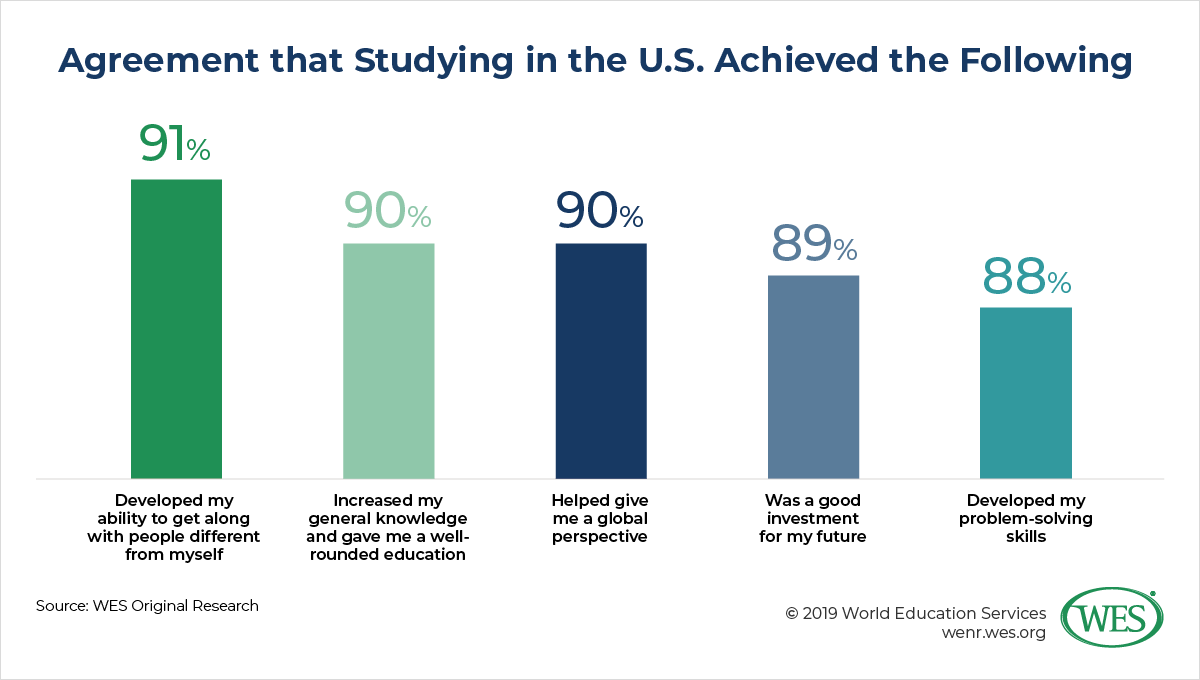 The top five countries of citizenship in this study are India, China, Nigeria, Saudi Arabia, and the Philippines. The vast majority of respondents from India, the Philippines, and Nigeria are currently residing in the U.S., while the majority of Saudi Arabian alumni have returned home. Chinese alumni are most evenly split, with large proportions residing in the U.S. and in China (see Figure 2). The majority of respondents from these countries said their U.S. degree is valuable in the country where they currently reside. Although alumni perceptions from all top five countries were generally positive, Saudi Arabian and Indian alumni perceive the value of their degree in their current country of residence at slightly lower proportions (see Figure 3). Currently 75 percent of international graduates say that the overall cost of their tuition plus living expenses was worth the purchase of their educational experience in the U.S. This may be surprising considering the high cost; nevertheless, disaggregating the data further shows particularly high agreement that the cost was worth it among alumni from the Philippines and Nigeria. Graduates from India and China, however, agreed at much lower rates. Nearly a quarter disagreed that the cost of their U.S. education was worth it. This result is worrisome, considering that Chinese and Indian students together make up more than half [10] of the international student population in the U.S. (see Figure 4). Alumni are satisfied with their U.S. education experience in many areas, regardless of their country of citizenship. The majority perceive an increase in career-specific knowledge, job opportunities, and employability, suggesting that a U.S. degree leads to better employment outcomes. While graduates overall (85 percent) indicated that their U.S. education helped them form a global network, Chinese graduates fell slightly below this average (81 percent). Networking as it is conceptualized in the U.S. may be unfamiliar and intimidating to international students, depending on their English language ability. Existing research [12] shows that Chinese international students in particular struggle to communicate in English. The language barrier could help explain why Chinese graduates are less likely to agree that studying in the U.S. helped them develop a global network (see Figure 5). For international alumni, securing employment and earning an income either in the U.S. or abroad is a key measure of success. Compared with how they assess other career success measures, alumni are less likely to agree that they are earning higher wages as a result of their U.S. degree than if they had earned the same degree in another country (see Figure 5). Additionally, 60 percent of graduates from Saudi Arabia overwhelmingly disagree that they are earning higher pay, and more than half did not perceive an increase in job opportunities, indicating disparate outcomes for alumni. These figures are supported by the higher unemployment rate found among Saudi Arabian graduates (see Figure 6). Given that more than half of the alumni surveyed graduated within the last three years, it is unsurprising that most (70 percent) are still in the U.S. today. Of those, 75 percent are employed full time and 11 percent are employed part time. International alumni from the Philippines have been particularly successful in the U.S.: 85 percent have obtained full-time employment, and 10 percent, part-time. Indian alumni have also experienced high levels of success (84 percent). Interestingly, 83 percent of Saudi Arabian alumni are currently working in a full- or part-time position; however, when we disaggregate these numbers, only 50 percent are employed full time.

Despite their largely successful entry into the U.S. labor force, some students are in a state of precarity. In the face of increased structural and social barriers, they have not been able to convert their educational experience into meaningful employment. Constant visa changes, restrictions, and delays are making it increasingly difficult and confusing for alumni to make use of their U.S. education. The Wall Street Journal [15] reported that 78,000 fewer visas were issued in 2017 to international students in the U.S. than in 2016. As a result, the two largest international student populations—from China and India—saw the biggest drops. A former international student from China participating in our study noted, “The immigration rules are getting tougher on skilled professionals—the U.S. market is losing attractiveness as students face barriers to entry and post-graduation work opportunities.”

“Despite being highly qualified, I don’t believe the visa/immigration policies [in the U.S.] enable me to be flexible with my career or fully utilize my array of skills.” ~An international graduate from India with a degree in engineering

“There are not enough job prospects. Organizations are reluctant to hire international students. We are not getting the kind of opportunities for which we have worked so hard [even when we are] better than others who are getting those opportunities.” ~An international graduate from India with a degree in information and communications technologies

Qualitative data from the research indicate that international graduates encounter many challenges, particularly with regard to visa requirements and U.S. employer attitudes toward hiring international workers.

For their international students to maintain a high ROI, U.S. HEIs should take proactive measures, such as enhancing visa advising and services, to offer greater support to international alumni who are navigating post-graduation work opportunities. If international graduates are unable to obtain professional experience as a result of cumbersome and perplexing visa work processes, then U.S. HEIs may be at risk of achieving only low international student numbers [16] in the future.

Employment Outcomes of International Students Living Outside the U.S.

Of the 30 percent of alumni who left the U.S. after earning their degree, most believe it holds value in their current country of residence (83 percent). Seventy-seven percent who returned to their home countries are employed, either part time or full time. Students from China (88 percent), the Philippines (83 percent), Nigeria (83 percent), and India (74 percent) found employment in their home country after studying in the U.S. Saudi Arabian graduates, though still successful (69 percent), were less likely to be employed. Although the majority of all the alumni surveyed were satisfied with their U.S. education, 29 percent of Saudi Arabian graduates remain unemployed after earning their degree; this unemployment rate is 10 percent higher than that of any of the other top five countries and may indicate that local economic conditions are the problem, not the graduates’ U.S. education. Notably, Saudi Arabia’s unemployment rate in the first quarter of 2019 was 12.5 percent [17], about one and a half times India’s rate of 6.9 percent [18], and more than triple China’s 3.7 percent [19].

If International Alumni Could Start Over Again

Perhaps the greatest measure of international alumni perceptions of the value of their education is whether or not they regret their decision to study in the U.S. Eighty-one percent of respondents indicated that, given a second chance, they would still choose to study at a U.S. institution. However, when respondents were asked whether they would attend the same HEI, a slightly different picture emerged. Alumni from the Philippines were most likely to say they would attend the same institution, while Chinese alums were almost evenly split between choosing the same or a different HEI. Interestingly, more Indian and Saudi Arabian graduates said they would study at a different institution . These responses indicate a misalignment between international students and HEIs regarding best fit, particularly for students from India and Saudi Arabia (see Figure 7). Overall, alumni were successful at finding employment after graduation, and they look back on their U.S. education experience positively. Of recent and past graduates, 81 percent said they would still choose to attend an institution in the U.S. if they could start over—a clear indication that U.S. HEIs are providing a high-quality education to international students. In addition to revealing these positive perceptions, the study shows that there are some areas—concerning cost, expectations, and career services—that could be improved to enhance the international student and graduate experience.

Although financial and structural barriers that impact the student experience are beyond the control of institutions, the following institutional actions can improve the ROI of international students’ U.S. education:

For instance, Michigan State University holds a weekly networking event, Coffee Hour [21], which provides an opportunity for international students to connect with other students, alumni, and professionals. The University of Illinois at Urbana-Champaign has developed several innovative networking programs [22] for diverse student populations. One is the Diversity and Inclusion Networking Exchange (DINE) [23], which helps students engage with employers. Other HEIs can develop similar programs and gear them toward international students.

Sustaining and improving the ROI of a U.S. degree speaks to institutional as well as student outcomes. Increasing international student numbers is contingent on the quality of the educational experience U.S. HEIs offer. Other countries are strategically attracting international students with a proliferation of English-medium education, proactive measures to internationalize their higher education systems, and more opportunities to parlay education into work opportunities. In this increasingly competitive environment, U.S. HEIs must respond by continually assessing and improving their offerings in order to maintain their status as a top choice.