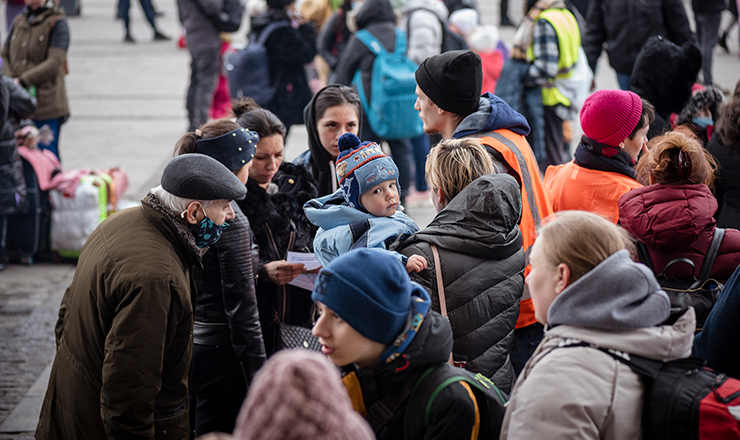 The war in Ukraine has exacted a terrible toll on the country and its people. Intense fighting continues to claim the lives of countless innocent civilians, while indiscriminate shelling is reducing once lively neighborhoods to rubble, forcing millions to flee their homes. Since the war began, more than five million Ukrainians [2] have fled the country, creating one of the worst refugee crises in recent history.

As its impact ripples around the world, the war is also revealing the fragility of the existing global order. It has upended the global economy and raised the ominous specter of nuclear war.

The conflict in Ukraine has also sparked discussion of the international higher education sector’s obligations to refugees and displaced people—a topic that formed a central part of the April #IntlEdNow [3] Twitter chat organized by World Education Services (WES). Twitter chat participants also considered what the higher education community is doing to help not only Ukrainian students and international students fleeing Ukraine, but also displaced students globally.

As Jessica Sandberg, dean of international enrollment at Duke Kunshan University in China, pointed out, the war in Ukraine has temporarily brought the higher education community together and helped rally efforts around a common cause. “With the global spotlight on Ukraine, now is a great time to solicit donors and build and expand international student emergency funds,” she noted [4] during the discussion. In what follows, we summarize some of that conversation’s key insights.

Following Russia’s invasion of Ukraine, the higher education community in the United States and Canada voiced unanimous support for those affected by the war. However, not all of these statements of support have been backed by concrete action. As Karin Fischer, a contributing writer at the Chronicle of Higher Education, noted [5], the onus is on individual higher education institutions to support displaced students: “One of the biggest challenges in supporting displaced scholars is that it’s largely up to individual U.S. colleges to fundraise, find positions for, and host displaced scholars. As a result, the response can be ad hoc and uneven.”

While the war in Ukraine continues to garner a great deal of media attention, the plight of displaced scholars from other regions of the world is often overlooked. As Lisa Unangst, visiting assistant professor at Ohio University’s Patton College of Education, observed [6], while the war in Ukraine has drawn attention to the importance of displaced scholars within the higher education community, it has yet to foster a unified response from the sector: “Clearly attention has been drawn to issues related to displacement, but in the U.S., we continue to see a fragmented response: some institutions, like the University of Chicago, have committed to paying tuition for undergraduates directly impacted by the war, while many others have simply issued statements of concern.”

Still, the higher education community does have an important role to play in supporting students impacted by conflict. Francisco Marmolejo, the president of higher education at the Qatar Foundation and a WES Board member, advised higher education institutions not to shy away from taking a strong stance on these issues. In fact, taking action to support those impacted by conflict around the world is an important part of higher education’s global mission. Addressing these crises can also help create more welcoming campuses and foster the development of more globally minded scholars. “Higher education institutions should not distance themselves from global crises. A response to these crises requires more awareness, related research, and concrete action. Also, in addition to the Ukrainian crisis, we should remember other cases of displaced students, such as those from Afghanistan, Palestine, Nigeria, and elsewhere,” Marmolejo stated in a tweet [7].

In the case of those students affected by the war in Ukraine, higher education institutions have done a good job raising awareness of the plight of displaced students and the struggles they face. However, stronger, more concrete action is still lacking.

Calls to Do More

Twitter chat participants also highlighted the work of several organizations, non-profits, and coalitions in the U.S. and Canada that provide aid to Ukrainian students in the form of full scholarships, mental health support, application fee waivers, tuition deferrals, travel, and housing assistance. For example, in the U.S., the Presidents’ Alliance on Higher Education and Immigration’s RESPONSE Campaign [8] is a coalition of organizations and higher education institutions working toward improving refugee student access to higher education. The international network Scholars at Risk [9] and the Institute of International Education’s Scholar Rescue Fund [10] provide similar supports.

The university-based refugee resettlement and sponsorship model is particularly powerful. According to Sarah Dryden-Peterson [11], associate professor at the Harvard Graduate School of Education: “College- and university-based pathways to refugee resettlement also hold great promise in creating migration opportunities for refugees, enabling access to their future-building through education, and mobilizing U.S. campuses in service to one of the great collective challenges of our time.”

However, Twitter chat participants observed that much more can and should be done—more stakeholders need to be involved to assume the shared responsibility of supporting displaced students.

The Need for a Trauma-Informed Approach

Twitter chat participants also highlighted the importance of addressing the deep trauma displaced students experience being uprooted from their homeland. Once in their new countries, these students will need strong psycho-social, mental health, and wraparound supports [18] to help them reestablish new lives.

A number of experts say it is important for displaced individuals to resume their studies as quickly as possible. According the Refugee Educational Advancement Lab [19] at George Washington University, “after massive upheaval and once survival is ensured humans aspire to regain ownership over their human rights, including education. A return to the educational routine and the safety that classrooms and institutions provide is but one small but critical source of comfort educators the world over can offer those whose lives have been uprooted. Education is, and will always be, among the most precious and foundational rights that every human being deserves.”

From an educational perspective, World Education Inc., a non-profit dedicated to improving people’s lives around the world through education and social and economic development, pointed [20] out the need for educators to use trauma-informed practices when teaching displaced students: “Trauma impacts an adult learner’s ability to learn and pursue their goals. International educators will need to use trauma-informed practices in our classrooms and programs.”

The Power of Technology

Uprooted students, scholars, and researchers face countless barriers when applying to higher education institutions in the U.S. and Canada, from frozen assets and challenges accessing the internet to issues obtaining and verifying their academic documents.

Still, online education and advancements in educational technology can help.

An example is the CrowdED Learning initiative [21], an inclusive digital learning model developed by the EdTech Center @ World Education, a grantee partner of the WES Mariam Assefa Fund. Launched during the early days of the pandemic, this open educational resource (OER) was developed to make digital learning more equitable and accessible to immigrants and refugees. It features a digital skills library of quality educational resources in multiple languages.

Higher education institutions can adopt similar initiatives. “Universities should use their virtual infrastructure to guarantee free access to anyone in or from Ukraine and other places who wishes to continue their education and earn or finish a degree,” Santiago Castiello, a higher education scholar-practitioner, tweeted [22].

In addition to education technology and OER, community colleges are an important pipeline connecting higher education to the workforce. According to Teresita Wisell, executive director of the Community College Consortium for Immigrant Education (CCCIE): “Community colleges [23] fill many gaps, particularly for immigrants and refugees coming with credentials from their home countries. We can support language advancement, help people access short-term industry credentials, and help build networks.”

Education as a Human Right

Participants also noted that, from a policy perspective, it is critical to frame access to higher education as essential to displaced individuals’ success in a new country. Their success has a ripple effect across the entire community, thereby improving the well-being of the communities where they settle. Taking this holistic, inclusive approach reframes higher education as a “powerful driver for change [24],” recovery, and growth among displaced individuals.

Ohio University’s Unangst noted the importance [25] of acknowledging “education as a human right” and recognizing the role higher education plays in improving “individual and community well-being” and “rebuilding conflict states.” She also highlighted the urgent need for the development and iteration of policies that center equity in all national contexts.

Many Twitter chat participants noted that for displaced and refugee students there needs to be improved access and better pathways to higher education, more support programs while on campus, and a more direct pipeline to the workforce after graduation. Marmolejo highlighted [26] four major principles that should shape the support higher education institutions provide to these students: “Our response in higher education should be simple and bold: flexibility, affordability, compassion, and empathy.”

The outbreak of the war in Ukraine in February served as a stark reminder that we live in a volatile and fragile world. But, as Twitter chat participant Jessica Sandberg remarked [28], the humanitarian crisis in Ukraine also underscores the importance of international higher education. During conflict and mass displacement, students shift their focus and concern to their immediate safety and survival, putting their higher education goals in jeopardy.

Editor’s note: Some of the tweets have been lightly edited for clarity.