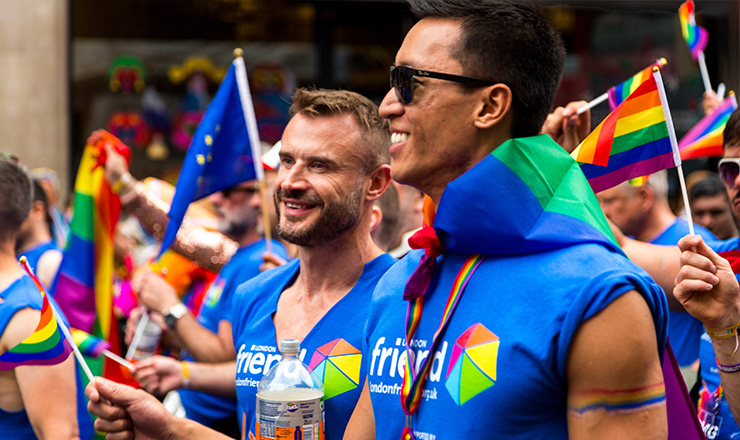 LGBTQ+ people in general, and refugees in particular, continue to face a heightened risk of violence, abuse, discrimination, and exploitation around the world, according to a new report by UNHCR.

As 2022 began, 89.3 million people [2] worldwide remained displaced and stateless after having been forced to flee their homes, according to the latest Global Trends report of the United Nations High Commissioner for Refugees (UNHCR). The report was published in June during Refugee Awareness Month.

Today, deadly conflicts, such as those in Ukraine, Afghanistan, and sub-Saharan Africa, have brought the number of displaced individuals to the astounding milestone [3] of more than 100 million for the first time on record.

Among them, millions of LGBTQ+ refugees are vulnerable and marginalized [4]. “Fleeing persecution and socio-economic exclusion, they often reside in countries that do not provide strong human rights protections or actively discriminate based on sexual orientation and gender identity,” the UNHCR report noted.

The same month as the release of the UNHCR report, the LGBTQ+ community finally gathered at in-person events to celebrate Pride month following a two-year hiatus due to the COVID-19 pandemic. The festivities resumed amid a resurgence of anti-gay prejudice that serves as a potent reminder of the threats facing LGBTQ+ people. For example, Oslo cancelled [5] its annual Pride Parade after a gunman opened fire at a popular LGBTQ+ nightclub, killing two people and leaving 21 others wounded in what Norwegian police called an “act of terrorism.” In the Republic of Türkiye (formerly the Republic of Turkey), organizers of an LGBTQ+ Pride parade reported that the government had “declared war” on the community after it arrested nearly 400 people [6] in Istanbul.

These events reinforce the UNHCR’s findings that LGBTQ+ people in general, and refugees in particular, continue to face a heightened risk of violence, abuse, discrimination, and exploitation around the world. To this day, more than 70 countries [7] still criminalize consensual same-sex relationships between adults.

Escape Is the Only Option

Sitting on his apartment’s balcony with a stunning view of downtown Vancouver, where he lives with his husband, Matthew, and their French bulldog Freddie Potato, Danny Ramadan is multitasking between writing his next book and organizing his very busy schedule for the coming months.

In Toronto, Farida Taher is also juggling the planning for her upcoming destination wedding and making arrangements for a major medical procedure that she’ll undergo a few months before the ceremony.

Another person busily making plans is Mohamad Altasseh. Soon the Ottawa resident will be travelling to Toronto for work. He’ll also be meeting some friends and spending time with a special someone during his visit.

Danny, Farida, and Mohamad’s everyday lives are fairly unremarkable. But until a few years ago, they would first need to ensure their safety and freedom before they could make any plans. As members of the LGBTQ+ community, all three were forced to flee their homes before finally settling in Canada. Danny, Farida, and Mohamad count themselves lucky to have been able to escape and start new lives. Many others have not been so fortunate. Danny Ramadan is multitasking between writing his next books and organizing his very busy schedule for the coming months.

LGBTQ+ Ukrainians seeking safety in surrounding states have also met with prejudice, discrimination, and violence, according to Dane Bland, director of development and communications at Rainbow Railroad, a global non-profit organization working in six regions around the world to relocate LGTBQ+ people.

“We’ve seen increases [in] requests [for help] not just from Ukraine, but also from Belarus, Romania, Poland, and inside of Russia too. The social crackdown that is taking place all around that area because of the war has resulted in LGBTQ+ persecution,” Bland noted.

With global displacement on the rise, the Rainbow Railroad organization has received more than 5,000 requests for assistance since the beginning of 2022.

Homosexuality is not accepted in MENA countries [9], and it’s forbidden by law in most of Middle Eastern countries. Syria, Danny and Mohamad’s home country, and Egypt, where Farida is from, are two of these countries.

“My father shoved the verses of the Qur’an down my throat at every corner,” Danny revealed in his 2017 TEDx presentation [10]. He also shared that his father tried to engage him in “character-building activities” such as aggressive sports and work at a construction site because he suspected that Danny was gay.

After her family kicked her out of her home for coming out as LGBTQ+, Farida struggled to survive. One day she was attacked on the streets of Cairo and decided to expose the violence experienced by LGBTQ+ people in Egypt on social media. Her posts brought her to the attention of the police, who sought her arrest. Fortunately, she managed to flee the country.

In Syria, Danny was similarly persecuted. Police dragged him from his apartment and held him in prison for six weeks until one of his friends bribed the officers to set him free. Danny fled Syria shortly after his release. To this day, he doesn’t know why he was arrested.

“I’m from a Sunni Muslim family. My father has a Ph.D. in Islamic studies and is considered a sheikh in town,” said Mohamad. Growing up in a small village outside Damascus, where “everyone knows everyone,” he felt different and struggled to connect with people. “It was hard because I didn’t have a word to express what I was going through, and no one else could help me either because things like homosexuality, gay, queer, were and still are unspoken in dominant Muslim cultures.”

LGBTQ+ Under Threats in the Caribbean and Latin America

“Over the course of our entire history [since 2006], the place where Rainbow Railroad has received the most requests for help is the Caribbean,” Bland said.

While currently not as fraught as the situation in the Caribbean, conditions are also worsening for LGBTQ+ people in South America.

With more than 200 million inhabitants, Brazil is the region’s largest and most populous country. Brazilians are known for being welcoming and open-minded, attracting millions of visitors to the country annually.

But violence in the country has surged [13], due mostly to the rise of a right-wing government [14] known for speaking out against historically marginalized groups. Additionally, the COVID-19 pandemic worsened the social and economic crisis in the country, exposing LGBTQ+ people [15], women [16], Indigenous people, Black communities, people with disabilities, and low-income individuals to greater persecution.

In recent years, Brazil has held the ignominious distinction of being the LGBTQ+ “murder capital of the world [17],” despite the Brazilian Supreme Court’s banning violence [18] and discrimination based on sexual orientation and gender identity in 2019. A recent spate of “barbaric” crimes [19] targeting the LGBTQ+ community has sparked fears and made international headlines.

“I lived in Sao Paulo for almost five years. The number of homophobic attacks reported then was mind-blowing. I was always afraid because it was happening while I was discovering that I liked girls,” Milena Alvarenga recalled. When she moved to Canada as an international student in 2016, in addition to meeting her wife, Lais Rios – also from Brazil – both she and Lais found the safety they longed for. Celio and his husband decided to move to Canada. There, his dream of becoming an actor came true, and he recently made his stage debut.

In Morro da Caixa d’Agua, situated in Complexo da Penha, one of the largest favelas in Brazil, Celio de Andrade checked all the “visible minority boxes. “I’m black, gay, and from the favela,” he noted. “The system was not made to help people like me to succeed in Brazil. It actually works against me.”

Celio and his husband decided to move to Canada. There, his dream of becoming an actor came true, and he recently made his stage debut. “This has been one of the most incredible experiences I’ve ever had,” he reported.

Like Celio, the others—Danny, Milena, Farida, Lais, and Mohamad—also found an encouraging environment in Canada to embrace their identities and share their stories through art.

Writing is how Mohamad has coped with traumatic memories and developed a sense of belonging and of healthy relationships. “Storytelling for me is a tool to heal, reflect, reconcile with the past, preserve my memories, and share my stories with the world,” he said.

Danny has become a novelist as well as a renowned public speaker and LGBTQ+ refugee activist. His debut novel, The Clothesline Swing, and children’s book, Salma, the Syrian Chef, have won numerous awards. According to Danny, his next novel, The Foghorn Echoes, comes out in August.

In September he will host “An Evening in Damascus,” an annual fundraiser for an organization that facilitates the resettlement of LGBTQ+ refugees from Syria to Canada. On his arm, he has tattooed 18 birds representing the people he has helped through the money raised by the event.

“I love this country,” Danny proclaimed. “Look at the life I was offered because I worked hard and who I am. This place is home.” 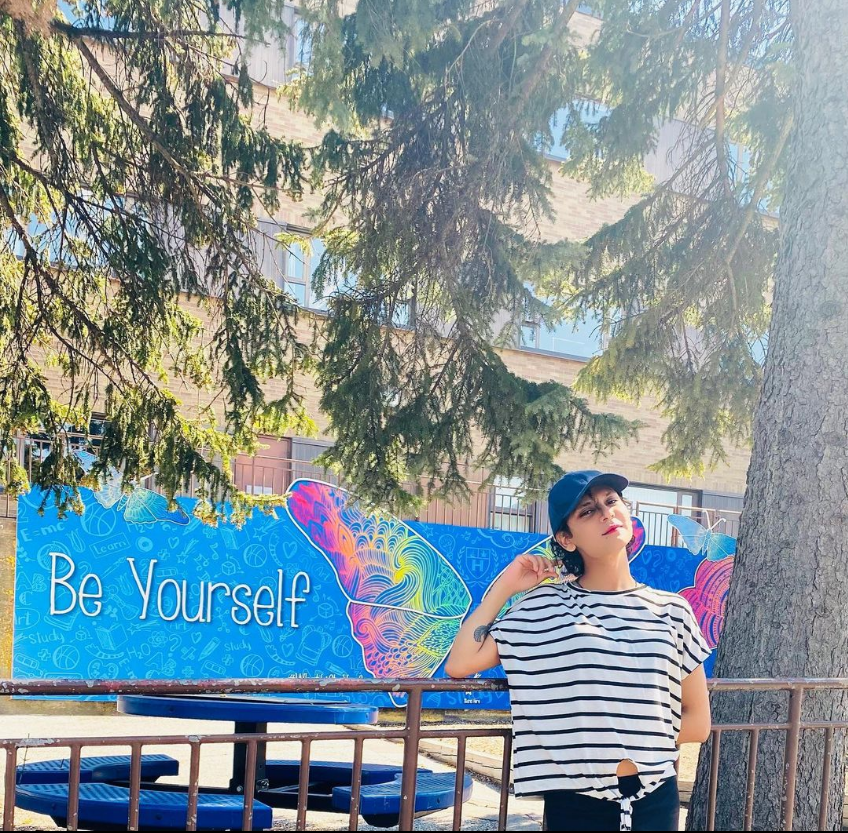 After being abandoned by her family and forced into hiding from Egyptian police, Farida has finally found her place in the world.

It is a heartfelt sentiment shared by Farida. After being abandoned by her family and forced into hiding from Egyptian police, Farida has finally found her place in the world, explaining that “home is not where I was born. Home is where my rights are respected and where I’m safe.”

And, because she feels secure and settled in Canada, Farida will soon embark on the biggest change of her life. Before tying the knot with her longtime boyfriend in early 2023, she will undergo gender confirmation surgery [22], a medical procedure that will align her body with her gender identity.

“When I was living in exile in Lebanon, I participated in workshops about gender and came out as a trans woman. Once I found out that I’m a woman, everything started to make sense,” Farida said.

With her upcoming surgery and nuptials, she will attain her highest goals. “I’m so happy and proud of myself,” Farida said. “I would never change anything that happened to me because it led me to where I am right now.”