As evidenced by ongoing uncertainty over the results of the U.S. presidential election, 2020 has been turbulent – the impact is global and, for higher education institutions and international students among others, often local and personal. The COVID-19 pandemic, as well as social, political, and policy factors, have shaped the fall term on campuses across the U.S. These factors, along with the outcome of yesterday’s election, will have long-term effects on the United States’ ability to attract international students.

To assess the impact of emerging trends over the spring and summer, WES conducted surveys of prospective students in April, June, and August. These surveys captured the views of both international students who study on temporary student visas and internationally educated immigrants with more permanent status in the U.S.

We published our latest findings on November 3. The report, COVID-19 and Fall 2020: Impacts on U.S. International Higher Education, focuses on results from June and August. These findings shed light on how international student views of study in the U.S. may evolve in the medium- to long-term.

The report addresses our findings about the varying perspectives of the two groups of prospective students:

The distinction between these two groups of students is important.

The views of immigrant students are easily lost in the international education conversation, as these students are typically classified as domestic students for the purpose of enrollment, though they often hold educational credentials from another country and have grown up or spent a significant amount of time abroad. They are an important segment of students, particularly given the decline in enrollments among domestic students that began a decade ago. As of 2018, immigrant students and second-generation U.S. citizens represented nearly 28 percent of all U.S. higher education enrollment.

Do Students Still Want to Enroll in U.S. HEIs?

As of August, over half of prospective international students and around two-thirds of prospective immigrant students indicated that COVID-19 had not affected their intent to enroll at U.S. institutions.

However, we did see changes in both groups’ enrollment interest between June and August. Specifically, a greater percentage of international students said that their interest in studying in the U.S. had declined (29 percent were less interested in August compared with 22 percent in June). The percentage of immigrants who reported less interest in enrolling at U.S. institutions ticked up marginally (from 9 percent to 13 percent). The numbers of immigrant students who were more interested also declined: from 28 percent to 21 percent. 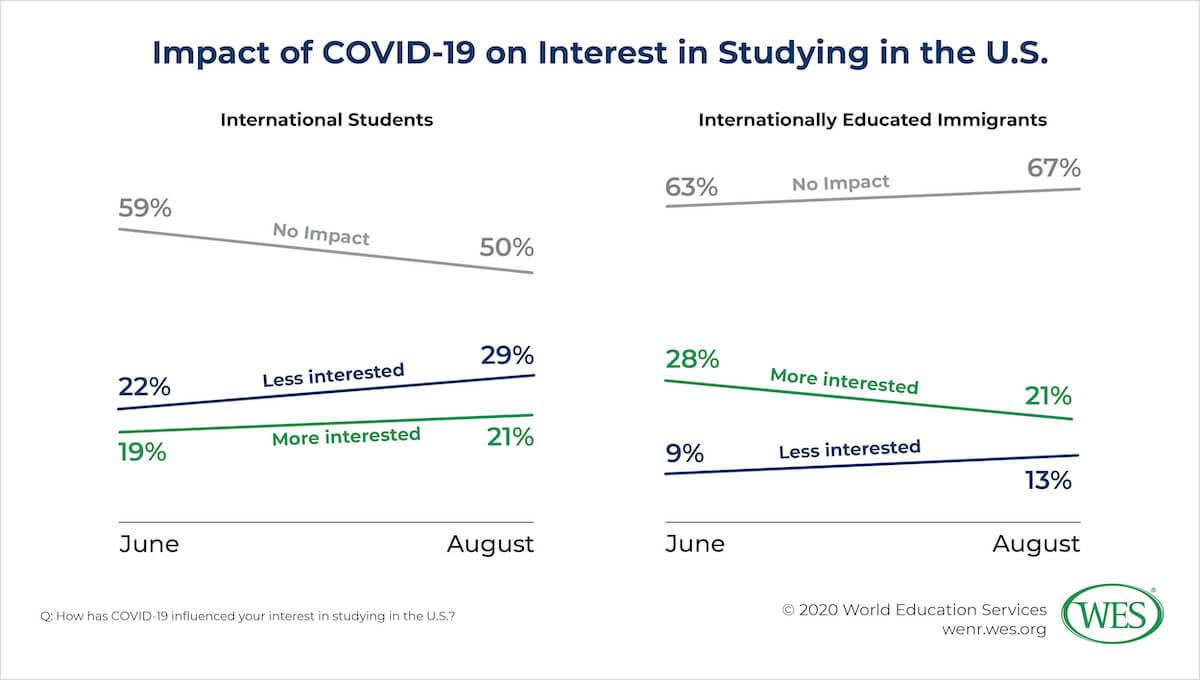 Will Students Be Able to Travel to and Enter the U.S.?

Throughout the summer, the ability to secure a visa and enter the U.S. were top concerns of prospective international students outside of the U.S. In June and August, international students expressed concerns about maintaining their health while traveling, but even more were concerned about obtaining visas. The proportion of those who were “extremely concerned” about their health and that of their family while traveling went up from June (37 percent) to August (44 percent). Recent events are unlikely to allay concerns. The U.S. continues to restrict travel from several key countries and regions because of the pandemic, as of late October: Brazil, China, Iran, Ireland, the United Kingdom, and the Schengen Area2 of Europe. The borders with Canada and Mexico also remain closed to all except to allow “essential travel.”

Meanwhile, many U.S. embassies and consulates around the world closed at the start of the pandemic and only began gradually reopening, often with limited functionality, starting around midsummer. Resurgence of the virus in hot spots around the globe may cause renewed delays. This decline in interest in online-only coursework tracks recent events: In July, the U.S. Department of Homeland Security’s Immigration and Customs Enforcement (ICE) division issued a policy restricting new international students from coming to the U.S. for online-only courses. Students staying in their home countries to take such courses face a number of challenges that may discourage enrollment. Those based in countries such as China and India may be required to attend courses that meet live in the middle of the night because of time zone differences; poor internet connections may affect delivery of classes; and the online experience is not conducive to the development of the social (and ultimately professional) networks that can be so crucial to students who come to the U.S. from abroad. In contrast, most immigrant students remained willing to take online-only courses.

What Other Options Are Students Considering?

By far the most considered option for prospective international students is delaying enrollment at a U.S. institution, indicating that a U.S. education is still highly desirable for many. Relatively small numbers of international students are considering not pursuing higher education at this time, studying in their home countries (not included in the chart), or enrolling in fully online degree programs from U.S. institutions.

Internationally educated immigrants, in contrast, are very interested in U.S. online degree programs. These students are much less likely to worry about legal status in the U.S., or the logistical challenges of studying online. Additionally, many are likely similar to non-traditional college students in that they have full-time jobs and families to support. Online options may be more attractive. 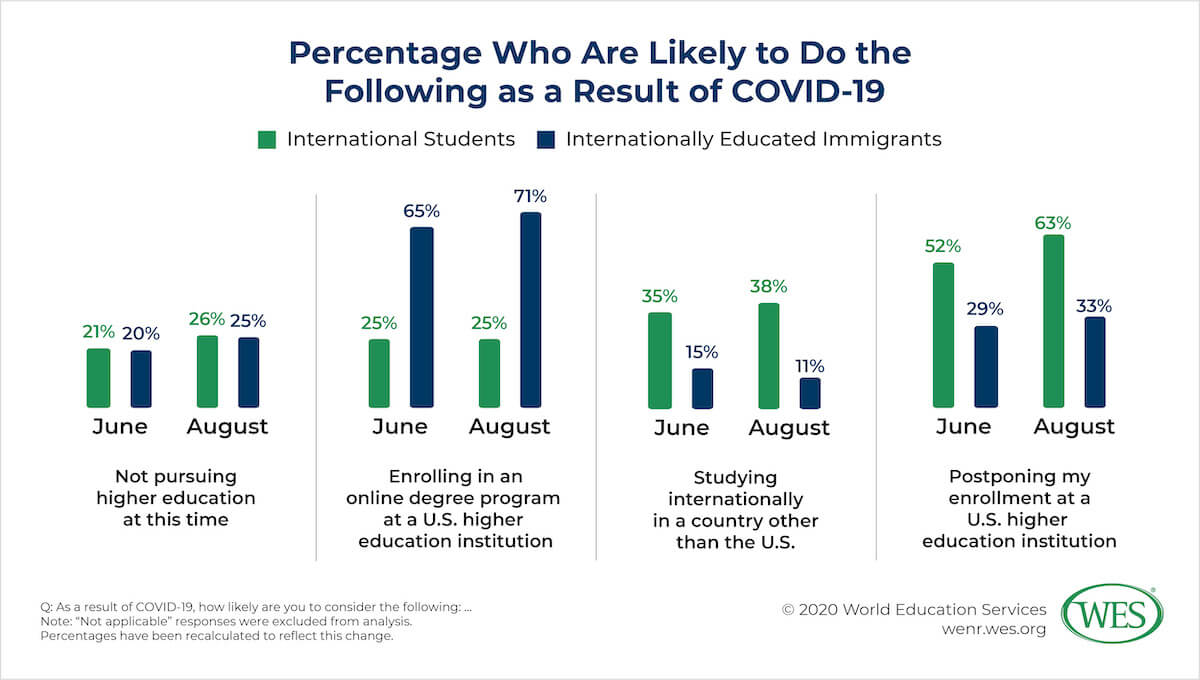 What Other Countries Are Students Considering?

One long-running concern, even prior to the pandemic, has been that the U.S. could lose a significant share of students to other host countries with friendlier policies to international students, particularly regarding work and residency opportunities. That concern has been heightened during the pandemic. Among prospective international student respondents, the number considering other countries has increased but only slightly, and overall the number is quite small. The top countries of interest are the other major predominantly English-speaking host countries: Canada, the United Kingdom, and Australia. While co-curricular and post-graduation work policies may be friendlier in these countries, many are also struggling with outbreaks of COVID-19, have not fully returned to in-person classes, and struggle to issue student visas. What Is the Impact of the Social and Political Climate?

A turbulent political and social environment combined with the pandemic is likely making the U.S. less desirable for study for some.

In August, 40 percent of prospective international students said they were less interested in studying in the U.S., up five percentage points from June. Meanwhile, the percentage who cited “no impact” declined from more than one-third to about one-quarter. We do not know, however, what aspects of the social and political environment are shaping student decision-making. 2. The Schengen Area is the travel zone made up of all European Union member states with a few exceptions and four European non-member states.