COVID-19 has had devastating effects on the financial well-being of many recent immigrants, temporary foreign workers (TFWs), and international students in Canada. Migrants—regardless of their immigration status—are overrepresented in essential roles and industries that have been hardest hit. As a result, they have been disproportionately affected by job loss and by the virus itself.

To better understand the impact of the pandemic on these groups, WES conducted surveys of applicants who received credential assessments between January 2018 and July 2020 for the purpose of immigrating to Canada. The surveys were distributed in April, June, and August 2020. The overall response rate was 6.4 percent; 4,932 valid responses were included in this analysis.

The report highlights the effect on permanent residents, temporary foreign workers, and international students residing in Canada at the time of the surveys. We examine the impact in the aggregate and on these three groups. Our results are consistent with trends identified in other recent research and provide additional insight into the economic impacts.

A significant portion of newcomers have lost jobs and income and cannot meet their basic needs.

Many who lost jobs or income did not benefit from CERB or EI.

Many are not accessing employment or settlement help from social service agencies.

The economic vulnerability of the respondents is likely due to their employment in precarious, low-wage, and often essential work, reflecting the impact of gender, racialization, and the devaluing of international education and experience in the labour market. Policy interventions aimed at addressing these systemic issues across the Canadian economy—in the context of the pandemic, the recovery, and beyond–will contribute towards mitigating disproportionate negative impacts on immigrants, temporary workers, and international students.

Context: The Evolving Impact of COVID-19 on Immigrants

The WES research survey findings add to the growing body of evidence that shows the disproportionate economic impact of the pandemic on immigrants, migrant workers, and international students.

Migrants—regardless of immigration status—are overrepresented in essential roles and industries that have been hardest hit, including agriculture, food processing, retail, and caregiving work.

To mitigate the financial impact of COVID-19, the Government of Canada implemented the Canada Emergency Response Benefit (CERB), which has since transitioned into the Employment Insurance system. This aid was made available to immigrants, temporary foreign workers, and international students; however, in order to be eligible, applicants had to have earned $5,000 in the previous 12 months. As a result, the long-term unemployed, many international students, and many recent immigrants were not eligible.

Newcomers face an increased risk of physical and mental health impacts. According to ICES, immigrants, refugees, and other newcomers accounted for nearly 44 percent of Ontario’s COVID-19 cases in the first half of the year, despite making up just 25 percent of the overall population. The highest rates of transmission were found in racialized immigrant and refugee communities, especially among those living in low-income neighbourhoods. Temporary foreign workers in agriculture and food processing were especially vulnerable to major outbreaks.

Getting acclimated to a new country with physical distancing measures in place is likely to make migrants, particularly recent newcomers, feel isolated from their networks and community supports. Statistics Canada found that immigrants (44 percent) were more likely to be worried about maintaining social ties and experiencing family stress during the pandemic than the Canadian-born (30 percent).

Immigration Status and Year of Arrival

Respondents were WES applicants living in Canada at the time of survey completion. Across all distributions, the largest group (48 percent), of respondents were permanent residents (PRs) followed by temporary foreign workers (TFWs) (41 percent), and study permit holders (7 percent). While this report focuses on PR, TFW, and international student respondents, approximately 5 percent of respondents were visitors or selected “other” immigration status. Visitors and “other” are included in any aggregate percentages reported, unless otherwise indicated.

Complete survey metrics and the respondent profile can be found in the appendix of the full report.

According to Statistics Canada, recent immigrants were more likely to be impacted by job loss because of their overrepresentation in low-wage jobs in hard-hit sectors. Between February and April, landed immigrants experienced a 16 percent decline in employment compared with an 11 percent decline for Canadian-born workers (LMIC). 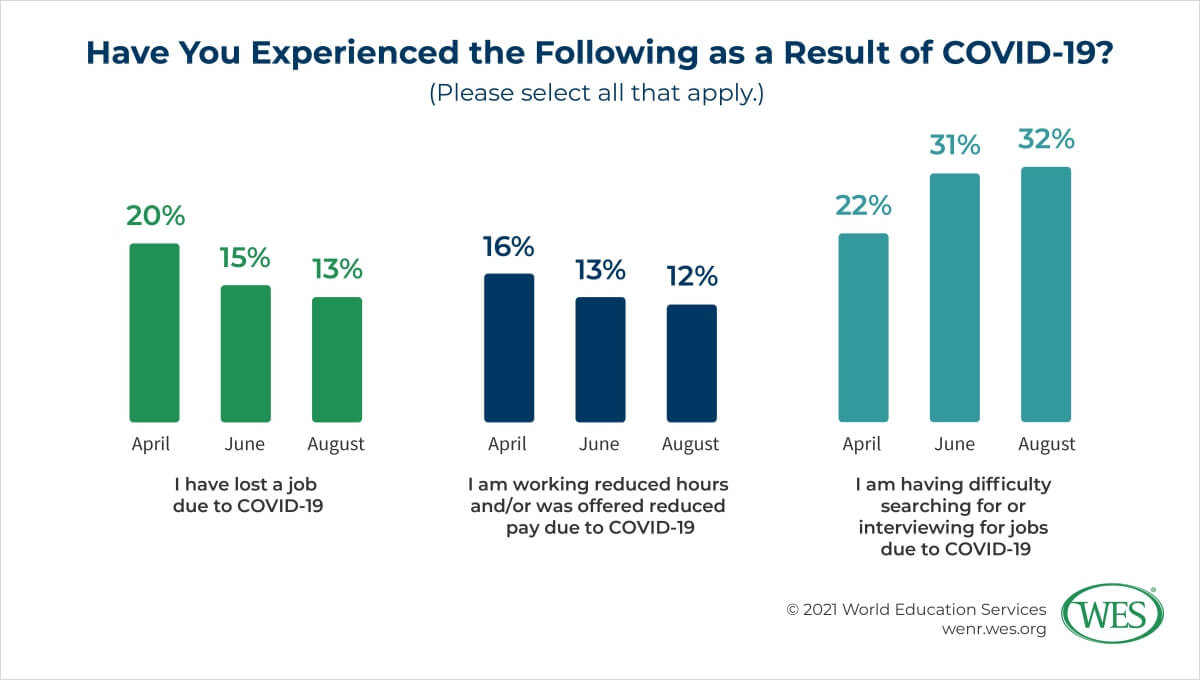 In addition to those who had lost jobs, 16 percent of April respondents reported working reduced hours and/or for reduced pay, decreasing to 12 percent in August.

In total, 14 percent of survey respondents reported having lost a job due to COVID-19. For those who remained employed, 13 percent saw a reduction in hours and/or pay. Job loss among respondents did, however, vary considerably by status. Almost one-quarter (23 percent) of international students had lost a job, compared with 14 percent of both PRs and TFWs.

As the pandemic continued, an increasing number of respondents reported difficulties searching for employment, with 22 percent reporting job search challenges in April, increasing to 32 percent in August.

International students and TFWs are employed in hardest hit sectors

Accommodation and food services was the top sector of employment for both TFW (14 percent) and international student (12 percent) respondents. This sector experienced a greater drop in employment from February to April than any other industry. In Ontario, where the majority of respondents resided, job losses from February to May were concentrated in wholesale and retail trade, accommodation and food services, manufacturing, health care, and social assistance.

Twenty percent of WES survey respondents reported being essential workers. Migrants to Canada are overrepresented in essential roles in sectors such as agriculture, food processing, retail, and care work, where the risk of contracting the virus is higher than average.

Student advocates reported that many international students were particularly hard-hit because they work on campus and lost their jobs when campuses closed. There was, however, change over time. In April, nearly a quarter (23 percent) of respondents reported that they had temporarily lost their primary source of income. This decreased steadily to 18 percent in June and 14 percent in August, as many businesses began to reopen and rehire employees.

Nearly half of respondents (45 percent-47 percent) reported a reduction in their savings.

Similarly, there was a reduction over time in the percentage reporting difficultly paying for essentials, from 14 percent in April to 10 percent in August.

Diving deeper into the personal financial impact by immigration status, it is clear that international students in particular are struggling in the face of the pandemic. More than a quarter (26 percent) reported the temporary loss of their primary income. Over a third (35 percent) indicated difficulty paying rent or utilities, and 18 percent had difficulty affording other essentials. 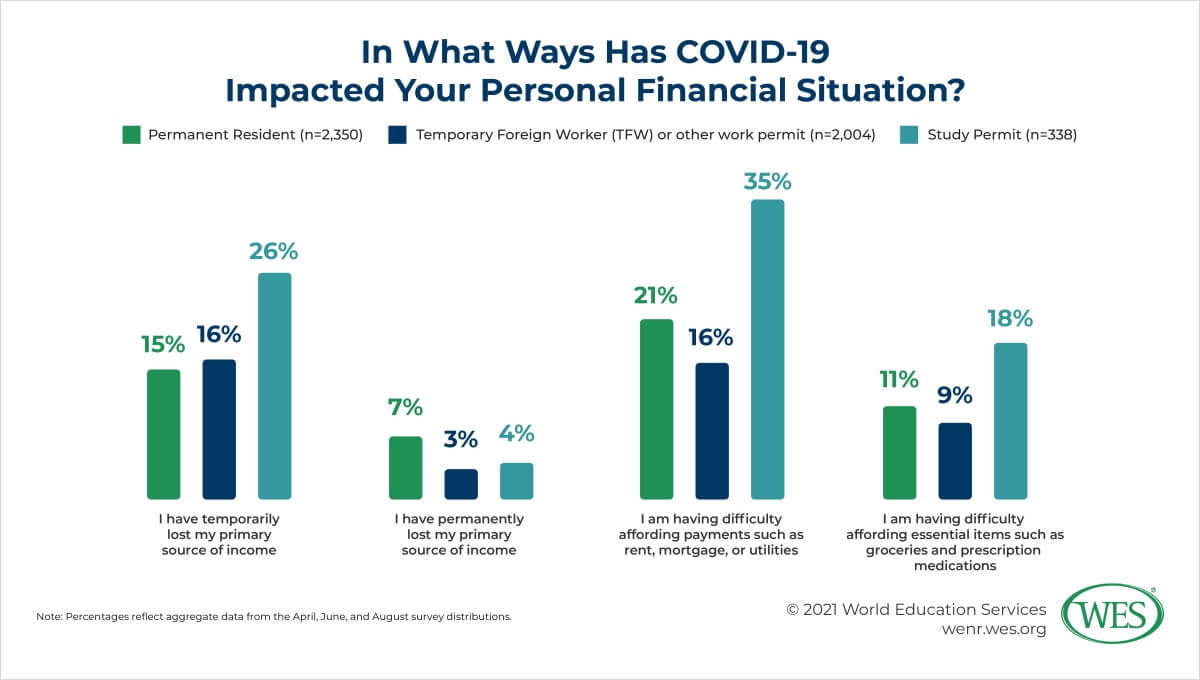 Of the three groups, permanent residents reported the highest percentage (7 percent) who permanently lost their primary source of income. More than twice that percentage (15 percent) had temporarily lost their primary source of income. As well, 21 percent of PR respondents reported having difficulty affording housing-related payments.

The higher percentages reporting temporary versus permanent income loss in all three groups likely reflect the fact that much of the job loss during the pandemic has been temporary thus far. By April, pandemic-related economic shutdowns had impacted 5.5 million Canadians including 3 million who had lost a job and 2.5 million who were employed but had reduced hours. By December, the number of Canadians impacted totaled 1.1 million including those who had lost a job or who were working less than half of their usual hours (Statistics Canada).

The Canada Emergency Response Benefit (CERB) was created to address the urgent economic needs of those impacted by the pandemic. However, the majority (52 percent) of all respondents who had lost a job or had their hours and/or pay reduced did not benefit from either CERB or Employment Insurance (EI). Many reported being unaware of benefits or believed they did not qualify.

Results differed by immigration status. Among permanent residents who had lost a job or had reduced hours/pay, a slight majority (53 percent) received a benefit, while 47 percent did not. The proportions were reversed among TFWs and students: 56 percent of those in need did not receive a benefit, compared with 44 percent who received either CERB or EI.

The CERB had looser eligibility requirements than EI in order to capture more workers. Approximately 4 million people had received CERB by late September when it was terminated, and eligible recipients were transitioned to a revamped EI system. According to the Canadian Centre for Policy Alternatives, 2.1 million people are expected to continue to receive financial aid through the new integrated EI system, with the potential for significant numbers of people who previously received CERB being left without support. Majority are not accessing social services

Eligibility restrictions most likely kept TFWs and international students from contacting social service agencies. In the case of international students, some are provided with services and supports through their educational institutions. However, TFWs are ineligible for many federally funded social services; 43 percent of TFW respondents indicated that they did not think they were eligible for employment or settlement services. Lack of access to services may exacerbate the negative impacts many TFWs have suffered during this time.

While permanent residents face fewer eligibility restrictions, it is important to note that 12 percent reported that they were interested in contacting a social service but didn’t know how, and more than a quarter (27 percent) reported that they did not think they were eligible for services.

Conclusion: Pandemic, Recovery, and Beyond

The findings of this research add to the growing body of evidence that reveals the disproportionate impact of the pandemic on immigrants, temporary workers, and international students. The findings also point to several specific actions that could mitigate negative outcomes and improve recovery prospects for migrants.

Some migrants may be at greater risk, in part because their status does not provide them with full legal protections or makes them ineligible for economic supports or services. To mitigate these risks, temporary workers need more direct and expedited pathways to permanent residency, particularly those working in high demand sectors and those doing essential work.

The pandemic has also brought renewed attention to the long-standing call to broaden eligibility and create targeted settlement and employment service interventions for temporary workers and international students. Such interventions are increasingly important as so many, particularly during the pandemic, are likely to transition to permanent residency. IRCC officials indicate that broadening eligibility and other targeted measures are under consideration. Survey results also indicate that more action is needed to ensure that permanent residents, students, and temporary workers know what supports they are currently eligible for and how to access them.

The disproportionate economic impact of the pandemic on immigrants, temporary workers, and international students has deepened the existing inequities in Canadian society. Viewed holistically, the economic vulnerability of the respondents in this study is linked to their employment in precarious, low-wage, and often essential work, reflecting the impact of gender, racialization, and the devaluing of international education and experience in the labour market. Policy interventions aimed at addressing these systemic issues across the Canadian economy—in the context of the pandemic, the recovery, and beyond—will contribute towards mitigating disproportionate negative impacts on immigrants, temporary workers, and international students.