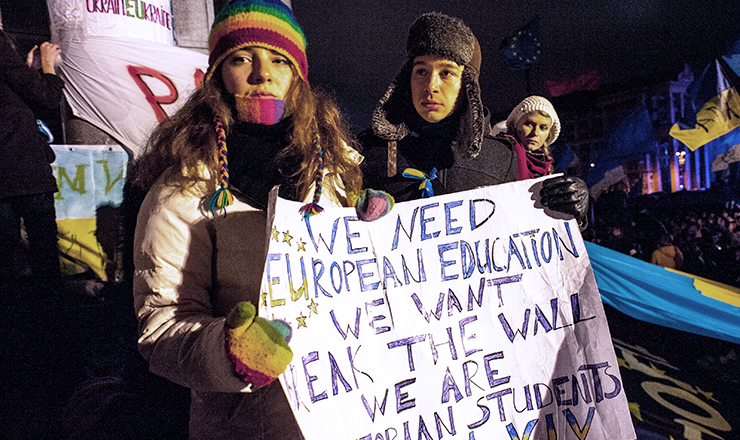 Students in Ukraine continue to struggle, and international students forced to leave because of the war encounter barriers in their own homelands. (Photo: Mstyslav Chernov/Unframe, Wikimedia Commons).

University students in Ukraine have begun an academic year like no other, set against the backdrop of a fierce war raging in the country. As students around the world return to the familiarity of traditional classrooms, little feels familiar to Ukrainian students as they resume their studies amid myriad challenges.

The war, which began in late February, has displaced more than 12 million people within Ukraine and in neighboring countries, including 4.6 million children. As of May 29, roughly 2,405 educational institutions had been bombed, 180 of which have been completely destroyed, according to UNESCO.

More than 7.5 million children, 1.5 million youth (ages 15 and above), and more than 70,000 international students who were enrolled in Ukrainian institutions before the war are affected by this loss.

Olha Ostrovskaya, assistant professor in the department of Otorhinolaryngology at Kyiv Medical University, said, “The educational situation has been difficult since COVID and it remains difficult today. We are not living in normal conditions, and continuing education is a big challenge for students and professors.”

Ahead of the 2022/23 school year on September 1, the Ukrainian Ministry of Education and Science announced that students could return to school in some areas far from the front lines. It imposed conditions that those schools must meet in order to receive students, the most important of which is the availability of underground shelters.

However, most students, including university students, are resuming their studies via remote learning. They are familiar with this method of instruction, having used it for an entire year during the first waves of the pandemic as well as the second semester of this year.

Ostrovskaya believes that the experience of remote learning has prepared students to continue their studies amid the war. “Without that experience, the risk of losing an entire year of education would have been very real,” she said.

Oleksandr Zaliesnyi, a final-year student at Bogomolets National Medical University in Kyiv, agrees with Ostrovskaya. “Having studied remotely during the pandemic, we know it’s possible to make it work. It’s much better than halting our education.”

But while remote study is the best option for many under the current circumstances, it is less than ideal, given the threat of interruptions to the power grid and the internet due to the war. Remote learning also hampers the education of students in scientific disciplines, such as Zaliesnyi, who require practical in-person training.

Universities in Ukraine are seeking to address these challenges. “Our university has given us the opportunity to train in any hospital close to our place of residence,” Zaliesnyi said in a phone interview. “This is a good solution for those who live in areas where hospitals are found, but it is not an option for everyone.”

Even so, Zaliesnyi still finds it difficult to focus on studying.

“You can’t live a normal life,” he said. “How can we study while we hear the sounds of the bombings and wonder whether or not we should move to the shelters? Concentration is necessary but impossible. I can safely say that all students want to go back to their studies, but the war and its repercussions make it very difficult.”

International students contribute significantly to Ukraine’s GDP, adding $542 million to the economy, or $3 of every $1,000 spent, according to research by the Ministry of Education and Science in late 2020.

In March 2022, 76,548 international students from 155 countries were enrolled in the country’s universities, according to the Ukrainian government. Students from India made up the largest portion of this group, roughly 25 percent, followed by students from Morocco, Turkmenistan, Azerbaijan, Nigeria, China, and Turkey. (For more, see the article “Education in Ukraine.”)

But the outbreak of the war prompted most of these students to leave the country quickly. Some have returned to their homelands, while others are waiting in neighboring states, monitoring the course of the war in hopes that it will end soon.

“We didn’t expect the war to last so long,” said Diger Dgundiger, an Iraqi national who was studying medicine in Kyiv when the war broke out. “We thought it would be over in a few days. I went to Germany hoping to come back soon, but that is no longer possible.”

Dgundiger did not return to his home country for fear of losing the opportunity to travel to Europe again, especially in light of the escalating unrest and living conditions in Iraq.

Unlike Zaliesnyi, who is able to do some training at hospitals near him in Ukraine, Dgundiger has not found an opportunity to intern at a German hospital; however, he will look for an internship in the summer.

Ahmed, an Egyptian student who asked that his full name not be used, faces circumstances much like Dgundiger’s. When the war began, he was studying engineering in Kyiv. He, too, chose to flee to Germany, hoping to enroll in an engineering program at a German university.

While he was welcomed and given aid upon his arrival, he was not offered residency and has not found a suitable university where he can continue his studies. “I am still waiting for guidance from the authorities,” Ahmed said. “I don’t know if I will be able to stay here, if I will be sent back to my country, or if I have the right to leave for another country.”

India, for example, does not recognize online education as valid, a policy that poses a huge obstacle to students returning from Ukraine. Many staged large sit-ins to demand a solution to their problem, either allowing them to enroll in universities or continue their education remotely.

Recently, India’s Supreme Court intervened on the students’ behalf by asking the government to respond to a series of petitions to allow the roughly 20,000 medical students who have returned from Ukraine to complete their education in India.

Moroccan students who fled the war face a similar plight. Morocco’s Ministry of Education has refused to admit them to the country’s public universities. Instead, the Ministry has given the students two options: to study either at private (and costly) universities, or remotely with their former Ukrainian universities.

“I regret going back to Morocco,” said Shama (who asked that her full name not be used), previously a second-year student at Kharkiv National Medical University. “Studying at private universities here is very expensive. The policy is unfair.” According to Shama, the cost of an academic year in Ukraine is about $4,000, while it can be as high as $12,000 at a private university in her home country.

Students from Morocco top the list of Arab students enrolled at Ukrainian universities, and they rank second among international students after Indian nationals.

Last week, Minister of Higher Education, Scientific Research and Innovation Abdellatif Miraoui announced a government plan to integrate Moroccan students returning from Ukraine into private universities’ medical, pharmacy, and dental programs. However, students will need to have passed an extensive series of exams administered on a single day, September 24, offered only in the cities of Rabat and Casablanca. The plan does not specify how many students will be accepted into these programs. Miraoui pointed out that admittance will be subject to the results of the specific tests.

A Glimmer of Hope in the U.S.

While students in Ukraine continue to struggle, and international students forced to leave because of the war encounter barriers in their own homelands, Ukrainian students seeking to attend university in the United States have found support at many of the country’s academic institutions.

As of April 2022, at least 248 U.S. colleges and universities were hosting Ukrainian students and offering them assistance in the form of emergency funding, mental health counseling, housing support, and legal advice, according to a report by the Institute of International Education (IIE).

American institutions have also opened their doors to more Ukrainians for the 2022/23 school year, providing assistance such as additional time to complete applications, waivers for some official documents, and financial aid. The University of Chicago, for example, launched a $20 million initiative that includes tuition fees for Ukrainian students, while Texas A&M University is covering tuition and living expenses for the academic year.

Some Ukrainian students welcomed by these initiatives have already arrived on U.S. campuses.

“U.S. educational institutions are very generous and open to developing their programs to receive students from Ukraine and other conflict countries,” said Jonah Kokodyniak, senior vice president of program development and partner services at IIE. “They know that these students need to complete their studies and also have a strong desire to return quickly to their countries and their families. Of course, it depends on how safe they will be there.”

As of July 22, IIE’s Emergency Student Fund for Ukraine supported 227 students with $643,609, according to Kokodyniak.

“These short-term scholarships have provided very important initial support to these students, but we are also watching, learning, and trying to raise more money to offer more support as the new academic year begins,” Kokodyniak said.

The door remains open for other Ukrainian students whose education has been derailed by the war. But to walk through it, they will have to navigate the application process.

To that end, World Education Services (WES) has determined the basis for accrediting the certificates of Ukrainian students to help them pursue their studies in the U.S. and Canada.

“Credential evaluation is a vehicle for gaining the recognition of credentials obtained outside of Canada and the United States and is an essential step in accessing the opportunities that internationally educated individuals have earned by completing their educational qualifications,” said Beka Tavartkiladze, senior director of global education and knowledge at WES.

Tavartkiladze explained that “WES is currently working with the Information and Image Center (ENIC Ukraine) of the Ministry of Education and Science of Ukraine to ensure the continued evaluation of the educational credentials of Ukrainian nationals through standard WES procedures.”

Meanwhile, Ukrainian nationals who cannot access the credentials required to apply for a standard WES credential evaluation and seek an evaluation report for education, licensure, or employment purposes are eligible to access their academic documentation through the WES Gateway Program. (See the related article: “The War in Ukraine Raises New Questions About How Best to Support Affected Students”).

The school year is still in its infancy, but students in Ukraine and other conflict zones need a lot of support to continue studying in peace and with excellence to make sure there are no more lost generations.