How Has COVID-19 Impacted the Financial Well-Being of Immigrants, Temporary Workers, and International Students in Canada? The COVID-19-related economic downturn has had a devastating effect on the financial well-being of many recent immigrants, temporary workers, and international students in Canada. Recent research findings from World Education Services (WES) highlight this impact.

With key emergency benefits set to end soon and worries mounting over the long-term impact of the recession on vulnerable groups, these findings point to the need for a recovery plan that includes a focus on migrants in Canada.

As the leading provider of credential evaluation services to prospective immigrants to Canada, WES interacts with hundreds of thousands of immigrants and international students annually. Our access to these applicants allows us to investigate the impact of the health crisis on their employment status, their finances, and their access to support benefits and services. In April and June 2020, we conducted surveys of WES applicants who had received credential assessments in 2018 or 2019 for the purpose of immigrating to Canada (see appendix). A similar survey, the results of which will be published in the coming months, was sent out in late August.

In June’s survey, we collected responses from more than 1,800 permanent residents, temporary workers, international students, and others who are currently residing in Canada. Their responses highlight the ongoing need for service providers and policy makers to focus their attention on these hard-hit populations.

Loss of Employment and Income

As the pandemic continues to disrupt economic activity throughout Canada, large numbers of permanent residents, temporary workers, and international students report a marked decline in their financial situation due to a loss of jobs and income. In June 2020, 15 percent of all respondents reported that they had lost a job as a result of the health crisis. Nearly a quarter (24 percent) of permanent residents and 22 percent of work permit holders had temporarily or permanently lost their primary source of income. For many, these losses have made affording necessities a challenge. Almost a quarter (24 percent) of permanent residents reported difficulty affording rent, mortgage, or utility payments. Among international students, the financial impact was even greater. By June, more than a quarter (26 percent) reported losing their primary source of income, while over a third (34 percent) found it difficult to afford rent or utilities. Despite widespread financial difficulties among respondents, only a limited number reported receiving Employment Insurance (EI) or the Canada Emergency Response Benefit (CERB), both of which are intended to offset financial and job losses. In June, just one-third of respondents who believed they were eligible for EI had received the benefit, up from 13 percent in April. Just under half (48 percent) of all respondents who believed they were eligible had received CERB in June. While low, this percentage represents a significant improvement over the proportion in April, when just 19 percent had received CERB.

Permanent residents and temporary workers together made up approximately 90 percent of all respondents receiving EI or CERB. Far fewer international students had received either benefit, likely because of the programs’ eligibility requirements. CERB requirements stipulate that international students must have earned more than CAD$5,000 in 2019 to be eligible. (It should be noted that the sample size for this question was relatively small.) The CERB is due to end in October. Those who are eligible will be transitioned to EI. To address the needs of “gig economy” workers who typically do not qualify for EI, the Government of Canada has announced that it will be creating a new transitional benefit. This new benefit is an important development for immigrants and students, who are often employed in more precarious jobs and not eligible for EI.

These results highlight the importance of ongoing outreach to ensure that newcomers, along with students and temporary workers, receive clear information about the services available to them. 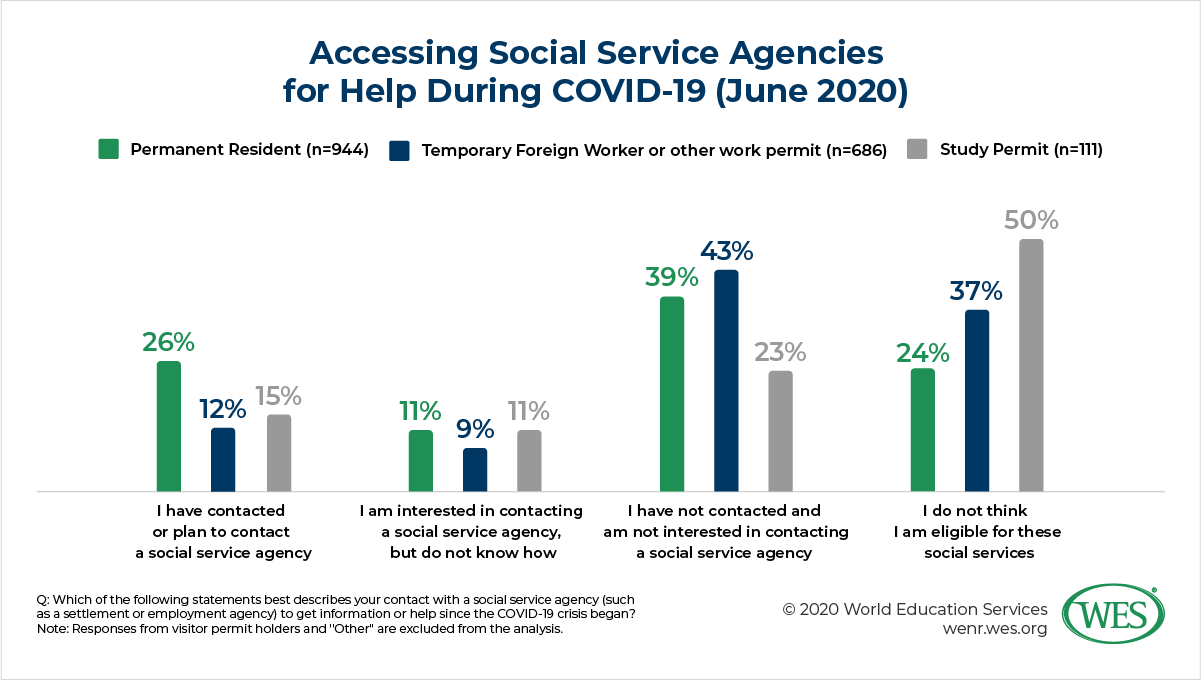 WES’ findings add to a mounting body of evidence which suggests that the economic recession is disproportionately impacting Canada’s most vulnerable populations: women, racialized minorities, and immigrants. One study found that nearly two-thirds (63 percent) of all Canadian jobs lost in March were held by women. In some industries, such as health care and social assistance, jobs held by women accounted for nearly all the jobs lost. A recent Statistics Canada crowdsourced questionnaire found that a higher proportion of respondents in most visible minority groups reported that COVID-19 has had a strong or moderate negative financial impact than did those who identified as white. Those identifying as Arab, West Asian, or Filipino were most likely to report this effect. Another study revealed that between February and April, landed immigrants experienced a 16 percent decline in employment, compared with Canadian-born workers’ 11 percent decline. Although employment among immigrants has recovered slightly, growing 7 percent by June, it was still outpaced by the recovery among Canadian-born workers, which grew 9 percent by June. These findings emphasize the pressing need among these vulnerable groups for emergency support and services.

Supporting immigrants, temporary workers, and international students now is also an investment in Canada’s future. In the short term, the crisis has caused the economy to shed jobs at an unprecedented rate. But in the long term, the nation’s aging population and low birth rates mean that there will not be enough Canadian-born workers to meet the economy’s growing demands. These talent shortages can only be addressed through robust immigration and the effective integration of landed immigrants into Canada’s labour market.

Many researchers point to the long-term economic “scarring” effects of recessions and unemployment, especially on recent arrivals and new graduates. In light of mounting evidence of the pandemic’s negative economic impact on immigrants, temporary workers, and international students, it’s clear that an evidence-informed recovery plan which ensures that migrants to Canada are not left behind will be essential to the country’s long-term prosperity.