The COVID-19 pandemic has been felt deeply across the world, affecting everything from the micro of our day-to-day lives to the macro of the global economy.

To understand the potential impact on prospective immigrants to Canada, World Education Services (WES) conducted surveys in April, June, and August 2020 with applicants for a WES academic credential evaluation for immigration purposes. Our goal was to understand how intentions to immigrate were changing over time as the pandemic unfolded.

As a designated provider of credential evaluations required by the Canadian government for applicants to Express Entry economic immigration programs, WES interacts with many thousands of prospective newcomers to Canada every week. This report summarizes the trends in responses over the period of April to August 2020 of WES applicants residing outside of Canada. Complete survey metrics and the respondent profile can be found in the appendix of the full report.

Interest in immigrating to Canada increased between April and August 2020 among prospective immigrants.

In April, 38 percent of prospective immigrants were more interested in immigrating despite COVID-19. That percentage increased to 46 percent in August, with an additional 48 percent indicating that the pandemic had no impact on their interest, while only 6 percent were less interested.

Prospective immigrants expect economic conditions in their home country to be worse than in Canada.

The number of respondents planning to delay immigration dropped considerably between April and August.

The Changing Immigration Context Under COVID-19

Amid the changing global landscape, the Canadian government has remained committed to welcoming immigrants. On October 30, 2020, the federal government announced a new immigration levels plan for 2021-2023 to grow the population responsibly over the next three years. The new target for 2021 is 401,000 immigrants. These are the highest immigration level targets Canada has seen since 1913.

Since the spring, Canada’s immigration priorities have focused on immigrants who support both long-term labour market needs and immediate economic recovery. In the early months of the crisis, Immigration, Refugees and Citizenship Canada (IRCC) shifted to issuing Invitations to Apply (ITA) almost exclusively to those already in Canada as temporary workers or students. As a result, the early Express Entry draws were for the Canadian Experience Class (CEC) and the Provincial Nominee Programs (PNP). From September, other streams were included as well. A small pilot pathway to permanent residence was created for asylum seekers working in health care, and a temporary policy was developed to allow those on visitor status with a Canadian job offer to apply for a work permit without having to leave the country. As of September 30, IRCC had issued a total of 78,350 ITAs, which is nearing the 2020 target of 85,800. 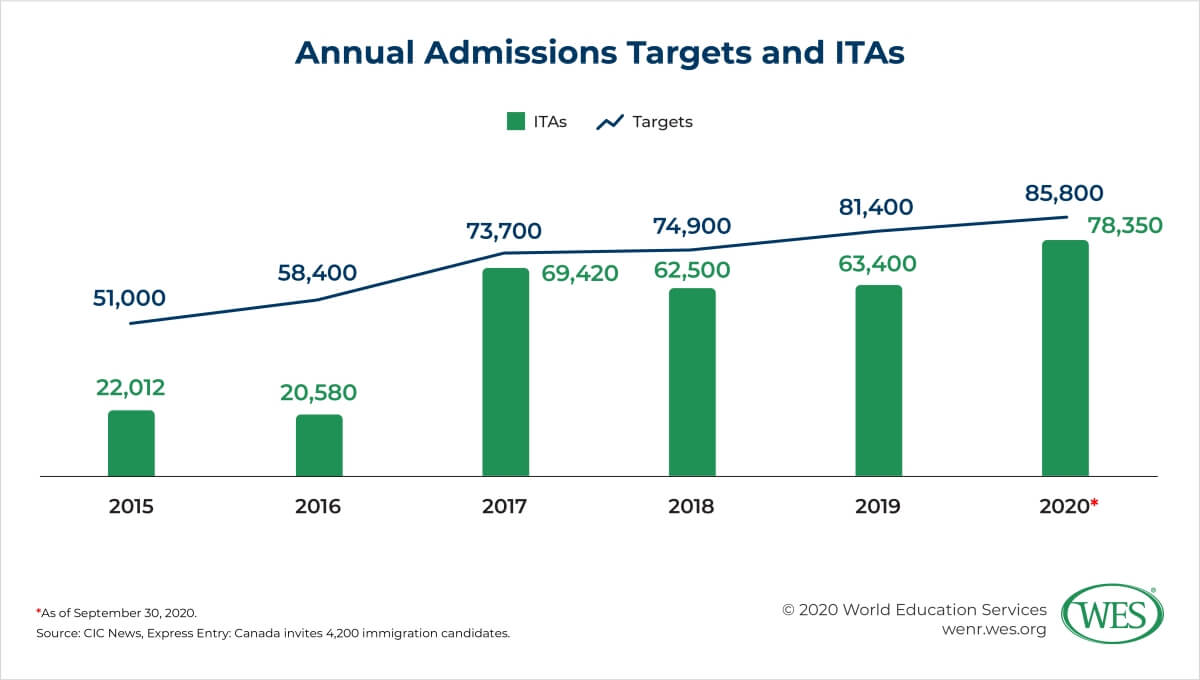 To contain the spread of the virus, Canada enacted travel restrictions which severely limited entry. Restrictions in place since March 18, 2020, have been extended several times. Mandatory self-isolation for 14 days is required of all travelers entering the country.

IRCC has focused on priority applications from permanent residents returning to the country, individuals with a work permit who work in or support essential services, and those in vulnerable groups. Application processing times have been affected. According to IRCC, the aim is to process permanent residence applications filed through the Express Entry system within six months; however, because of the coronavirus IRCC is currently unable to estimate processing times.

The following groups are exempted from travel restrictions:

The negative perception of economic conditions in the respondents’ home country remained high (80 percent to 81 percent) from April to August. However, a decreasing number of respondents—56 percent in August, down from 68 percent in April—expected negative economic conditions in Canada. The difference in expectations for Canada and respondents’ home countries may explain the trend toward increasing interest in immigrating to Canada. Sixty percent of respondents in August expected COVID-19 to negatively impact the availability of jobs in their occupation or sector in their home country, up from 47 percent in April. Expectations of the pandemic’s impact on job availability in Canada remained relatively similar across the three survey distributions, with a slight increase in those who expected a negative impact from April (41 percent) to August (44 percent). Effect of Expectations on Interest in Immigrating

Consistently from April to August, the majority or a plurality of respondents stated that COVID-19 either had no impact on their interest in immigrating to Canada or that they were now more interested in immigrating. Those less interested remained steady at only 5 percent to 6 percent. Interest in immigrating despite personal and/or familial economic hardships and ability to pay the costs of immigration remained consistent from April to August. In total, across all three survey distributions, one- third (33 percent) of respondents expected COVID-19 to have a negative impact on their ability to pay the costs of immigrating, while just over half (53 percent) expected no impact at all. However, a plurality of respondents reported that personal and/or familial economic hardships would make them either more interested in immigrating (38 percent) or have no impact at all (40 percent). Expectation of a recession in Canada has no impact on immigration plans for almost half of respondents, and many would still be more interested in immigrating

In total, almost half (48 percent) of respondents across all three survey distributions indicated that an economic recession in Canada would have no impact on their immigration plans. However, the proportion indicating that a recession in Canada would make them less interested in immigrating increased from 22 percent in April to 31 percent in both June and August, while the proportion indicating that they would be more interested decreased from 34 percent to 19 percent.

In total, almost half (49 percent) indicated that an economic recession in their home country would make them more interested in immigrating to Canada, and almost a third (32 percent) reported that it would have no impact on their current plans. For almost half of the respondents (48 percent), a decrease in jobs in their sector/occupation in Canada would have no impact on their immigration plans Interest in immigrating from top source countries has continued or increased In August, only 12 percent of respondents were considering delaying immigration to Canada, a drop from 32 percent in June

The number of respondents who said they were unlikely to delay immigration increased sharply from April (35 percent) to August (62 percent).

In April, over a third indicated that they were likely to remain in or return to their home country. This fell to 20 percent in June and August. Those considering immigrating to a country other than Canada increased slightly from 7 percent in April to 12 percent in August. Canada’s international travel ban and related policies may be having an impact on respondents’ choice of immigration destinations. Top factors for reduced interest in immigrating for those considering delay

Top concerns of those less interested in immigrating and considering postponing their immigration plans included a decrease in the number of jobs in their occupation/sector in Canada, economic recession, and travel restrictions. Those citing the risk of contracting COVID-19 in transit to Canada decreased from April (45 percent) to August (38 percent).

The percentage of respondents citing travel restrictions impacting international mobility, a decrease in the number of jobs in their occupation/ sector in Canada, and economic recession in Canada and in an applicant’s home country show little change from April to August.